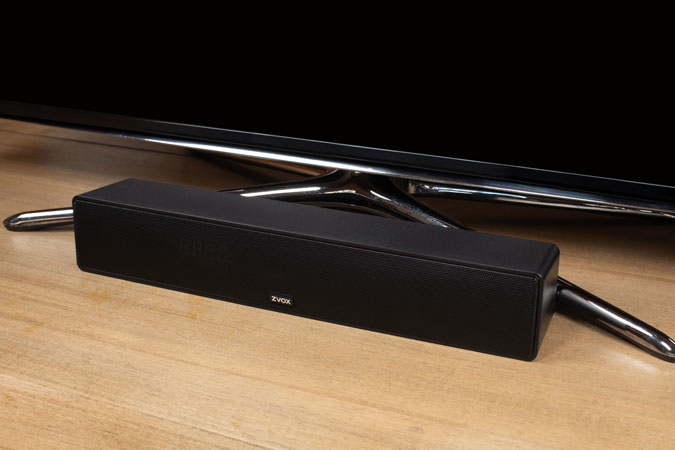 Q. My wife and I have somewhat severe hearing loss and while we can get around OK with our hearing aids, watching TV is always a challenge. What can be done to make it easier to understand the onscreen voices?

A. Something you should consider is turning on the closed captions, which can be done in the TV’s setup menus or the menus for your cable or satellite box. Few viewers would want to rely on them alone, but they may prove useful with the sound playing as they can help you make out words that you cannot clearly understand.

The ZVOX AV157 TV Speaker offers new innovations that make it the most powerful tool available for making television dialogue easier to understand. Poor television sound and muffled onscreen voices is still by far the most common complaint sent in this column, and in the past I have recommended ZVOX Dialogue Enhancing TV Speakers as a possible solution. These speakers feature AccuVoice, which is based on hearing aid technology. AccuVoice lifts the voices up above the background sounds so they can be more easily heard and understood. The ZVOX AV157 has six levels of AccuVoice adjustment.

The AV157 raises the bar with ZVOX’s new SuperVoice technology. SuperVoice goes a step further than AccuVoice because not only does it lift the voices up above the background sounds, it reduces the level of distracting background sounds as well to make the spoken dialogue as plain and easy-to-understand as possible. The AV157 has six levels of SuperVoice adjustment, and the increase in clarity is quite remarkable. At the highest settings it may sound a bit screechy to those who have normal hearing, but those with greatly diminished hearing remark that it sounds “just right.” With twelve total levels of adjustment, the AV157 is likely to have a sweet spot for most anyone and the settings can be changed depending on who is viewing, as well as when hearing loss progresses.

Regularly priced at $299, ZVOX is having an Election Day sale that makes it a great time to buy one. Through November 3rd you can save $100 on zvox.com by using the coupon code VOTE2020, bringing the price down to $199.

More on solar energy: I received the following tips from readers that I wanted to pass along to those exploring solar power for their home.

Reader tip: I suggest you send the questioner to energysage.com. It’s a great website with much information. If you want quotes, the site acts as a middleman so companies don’t get your contact information, and the bids you get are completely comparable. Tesla is a big name, but certainly not always the best choice. I got a great deal from a local company, with US-made panels and battery, and far cheaper than Tesla.

Reader tip: Something else to consider with solar energy is the potential savings over time. In California, where I live, electricity is 25 to 40 cents per more per kWh, so the solar panel and battery system can pay for itself fairly quickly. For me, the payback period of the entire solar system ($30k) is 10 years. After that my electricity is essentially free. Another way to look at it, factoring in the cost of money, if I financed the $30k solar with a 5% loan for 25 years, I’d pay $175/month, which would net me a $75/month (presumably more in the future) savings over my current electric bill.