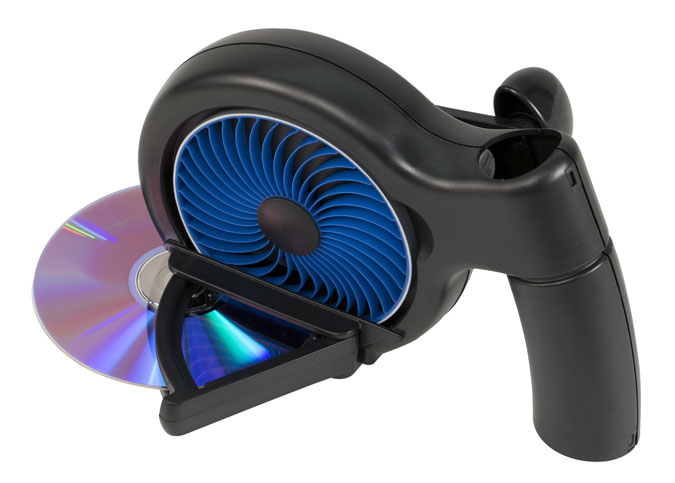 Q. I just got a new car. The CD player can not only play CDs, it can import music to the car’s hard drive to create an onboard music collection. About 20 of my favorite old CDs are scratched pretty badly and it cause skips when playing or importing. Is there any way to remove the scratches?

A. My favorite disc scratch remover is the CD/DVD SkipDr from Digital Innovations. It comes in a manual version for $19.99 and a motorized version for $39.99. The SkipDR uses a mildly abrasive spinning wheel and a special fluid to remove scratches and resurface the discs. Just spray fluid on the playing surface of the disc, put it in the SkipDR and turn the crank (manual) or turn it on (motorized.) After two rotations you remove the disc, buff it with the included cloth and the process is complete.

I’ve used the SkipDr for years and it has never let me down. The disc turns relatively slowly in relation to how much you turn the crank, so if you have a lot of discs to do at once you should definitely consider the motorized version.

Please note the CD/DVD SkipDR is not compatible with Blu-ray discs, which have a scratch resistant hard coating. If you do manage to scratch a Blu-ray disc there is a special Blu-ray SkipDR for $40.

Q. I have a $125 Nagaoka MP-110 cartridge that you recommended years ago, used with my old Hitachi turntable. Do you think the LP Gear The Vessel A3SE would be better for me?

A. Definitely. If I had to quantify it, I would say The Vessel A3SE is five times better than the Nagaoka MP-110. The MP-110 is still a good cartridge, it is just that the A3SE is a spectacular cartridge and it actually costs less! I’ve started to receive reader feedback on The Vessel A3SE and so far everyone is as excited as I have been. One reader commented he preferred it to the $350 cartridge he was using before, which was exactly my own experience. lpgear.com

Within two days of the column first appearing in print the price on Amazon and Best Buy was raised to the regular retail price of $219/pair. Sony held the line at $109 for a brief time before shooting up to match the others. I don’t know if this sudden price jump was due to a sales surge following the publicity or simply bad luck or bad timing on my part, but whatever the reason I am deeply disappointed for my readers as well as myself. The SS-CS5 is the kind of recommendation that brings me the most satisfaction: an affordable product capable of bringing tremendous enjoyment far beyond expectations.

My advice now is to hold off buying the Sony Core SS-CS5 Bookshelf speakers and wait for the price to drop again. I don’t believe the $219 price is sustainable because once you are over $200 there are much better speakers available in the $200-$300 price range. I will be watching for the price to drop again and when it does I will post on my website.