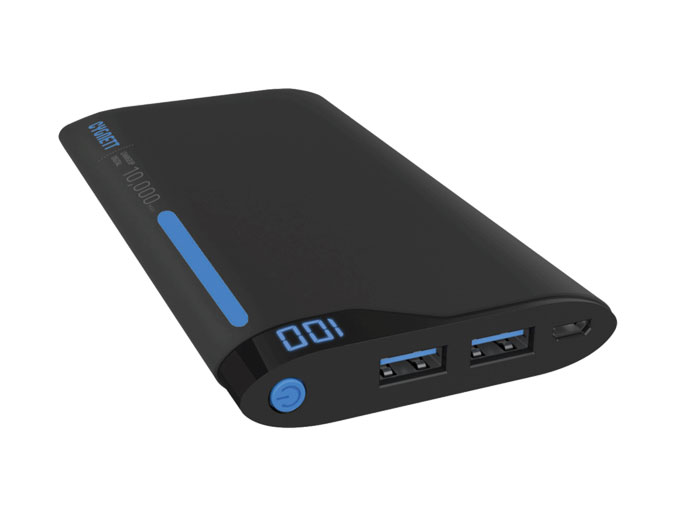 Q. I would like to get the local digital sub-channels you mentioned in a recent column. How do I connect the antenna to the HDTV while it is connected to DirecTV at the same time?

A. Your DirecTV box is likely connected to an HDMI port on the back of your HDTV. (And if it isn’t connected with HDMI, it should be, for the best picture possible quality.) The antenna uses a different coaxial screw connector. Use the TV remote INPUT button to switch between HDMI (DirecTV) and ANT (antenna.)

Once the antenna is connected, switch to the ANT input, go into the TV’s setup menu and do a channel scan. The TV will find and memorize all the channels it can receive with the antenna. Use the TV remote to change channels.

Premium power bank: I started writing about portable power bank chargers in December of 2014 and received a strong reader response about the topic. Everyone is looking for power on the go, it seems.

To say there are many choices on the market is an understatement. There are dozens of models starting at less than $10, and I have tried more than a few of them since that first column. What I have come to discover is that power banks are an extremely quirky product category. Operational and functional issues abound across makes and models. Though many units have LED bars to indicate charging status and remaining charge, these readouts often do not reflect reality and it is hard to tell how much power actually remains. Many models become quite warm to the touch when in use, they don’t charge up or recharge devices quickly enough, they turn themselves off before the device is fully charged (though power remains in the bank) and the claimed 2.1-amp outputs don’t really seem like high-speed ports at all. Very few of them ever merited a recommendation in this column.

I recently tried the Cygnett ChargeUp Digital 10,000 mAh power bank, a premium-priced model with premium technology to back it up. It lists for $79.99, significantly more than conventional 10,000 mAh power banks. It has an advanced lithium-polymer battery for a slim shape and light weight, a digital readout to show the exact amount of power remaining and two 2.0-amp ports that really do charge fast. It is lightweight, beautifully finished, and runs cool to the touch. I was extremely impressed by its excellent performance and flawless operation.

The ChargeUp Digital 10,000 is easily the best power bank I have ever used, but other 10,000 mAh models can be had for $25. Given this, when I first read about it I had mixed feelings about the value equation. When I tested it, though, I came to realize that for a lot of people it might be worth it. The high-quality finish, extremely useful digital readout, fast and efficient charging, advanced battery technology and the cool, trouble-free operation all combine to make it something special. The experience compared to an inexpensive power bank is like the difference between flying first class and coach, or driving a family sedan or a European sports car. Of course, both the coach seat and the family sedan get you to your destination, just like a cheap power bank can still charge your devices. But what a difference in the experience and performance!

Fortunately, you may not have to pay list price. I’ve seen it advertised for around $56, and that figure makes it much easier to justify the price premium. www.us.cygnett.com